Upper Mustang is a remote and extremely fascinating region of Nepal on the northern borders of Tibet. It was previously a forbidden Kingdom. Upper Mustang has been open for tourists since 1992. This destination is the historic walled city of Lo Mangtang. Its resticated area as well. We need to issue the special permit for the upper Mustang.

Life of Lo-Manthang has continued much the same as it has for centuries. People are steeped in religion here with numerous Gompas, Mani walls (prayer walls), chortens adorning the Kings palace and surrounds. Prayer flags flutter above each household, spreading god blessings to all corners of the world and the universe beyond. This area can be trekked all year round regardless of season. The people are well adapted to the region after  many centuries of experience surviving the harsh climate. They survive by practicing a form of  agro-pastoralism and seasonal migration. The  farming is done whenever irrigation is possible. Only one crop (barely) can be produced in a year.

If you are planning a visit to Mustang you need to be in good physical condition. The tour commences with a flight from Kathmandu to Jomsom via Pokhara. This  trekking route crosses the villages of Tangbe, Samar and Geling to reach Tsarang .The settlement of Tsarang is considered as one of the highlights of the tour a day before Lo Manthang.

Day 01: Arrival and Transfer to Hotel in Kathmandu.

Arrive at Kathmandu International Airport and get transferred to a hotel. Our Tour Manager will give you the briefing about the trip upon arrival in the Hotel.

After breakfast, proceed for a city tour of Kathmandu visiting Durbar Square, a complex of palaces, courtyard and temples, built between the 12th and 18th centuries used to be the seat of the ancient Malla kings of Kathmandu. In the afternoon visit the Swoyambunath Stupa and Patan City. Swoyambhunath Stupa, atop the hillock is one of the holiest Buddhist sites in Nepal enlisted in the World Heritage Site. Patan City is an enchanting melange of palace buildings, artistic courtyard and former palace complex. One remarkable monument here is a 16th century temple dedicated to the Hindu God Lord Krishna, built entirely of stone

After breakfast, we wil drive to Pokhara. Pokhara is a place of remarkable natural beauty. The serenity of Phewa Lake and the magnificence of the Fishtail Peak rising behind it create an ambiance of peace and tranquility. Pokhara is a perfect place to see the panoramic view of Himalayan region including Annapurna and Dhaulagiri.

Early morning drive to Jomsom (2720m), to Kagbeni 10 hours. Mustang starts from here.  The trail from Jomsom to Kagbeni follows all along the Kali Gandaki River BY public JEEP or by walk.

At places the trail is steep and passes through the ridges. Overnight in Chhuksang.

While hiking from Samar to Tamagaon one can experience the great views of Nilgiri Hills, Thorang peak and other higher Himalayan ranges.

Lo Manthang located in the wide valley at Tibetan plateau is the capital city of Mustang. We can visit their Majesties the King and Queen at their palace. The historical and spiritual city of Lo Manthang is a place worth exploring with its beautiful setting and picturesque buckwheat and barley fields.

Ghemi is famous for the ancient and longest Mani wall in Nepal which is said to be the large intestine of a demon.

Chaile  to Jomsom stay one night.

Day 16: After breakfast Drive to Kathmandu by Tourist Bus – Lunch onn the way , Hotel and dinner in Kathmandu.

After breakfast Drive to Kathmandu by Tourist Bus – Lunch onn the way , Hotel and dinner in Kathmandu.

Free day in Kathmandu or Sightseeing.

Day 18: Departure to your next destination .

Departure to your next destination .

The cost of each trip differs as per the size of the group, choice of hotel, client’s interest of service and correction in our itinerary.

For Price of this trip, please Contact us : info@nectravels.com

It is expensive to visit the region, a single permit costs $500 U.S. for ten days, extendable at a further $50 U.S. a day. All provisions must be carried in, accommodation is under canvas with full Nepali support staff.

If you stay more than 10 days inside the upper Mustang Trekking area ,Clients have to pay USD 50.00 per day per person. 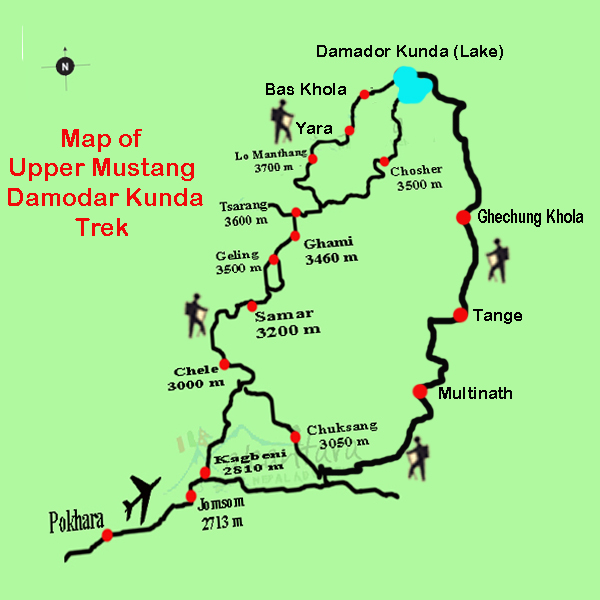 Damodar Kunda trekking is one of the holiest lakes of all Hindus as well as Buddhists.…