Langtang helambu valley trekking is one of the beautiful & classical treks in Nepal.  From this trek you can see beautiful mountains, forest, local villages and landscape. Langtang Helambu treks goes through the beautiful Langtang valley to the base of the high Himalaya before trekking back for a couple of days on to the Sacred lakes of Gosainkunda (famous religious site for both Hindus and Buddhists) followed by a push up over the lauribinayak pass (4609 m) for four splendid days trekking through the beautiful Helambu region. This trek finishes at Sundarijal, one hour drive from Kathmandu.

Arrival Kathmandu & transfer to a Hotel.

After breakfast proceeds for full day sightseeing in Kathmandu. Sightseeing spots are Pashupatinath Temple, Boudhanath Stupa, Swyambhunath Stupa, Kathmandu Durbar square and Patan Durbar Square. Pashupatinath temple is one of the holiest Hindu temples dedicated to Lord Shiva. Situated amidst a lush green natural setting on the bank of the sacred Bagmati river, the temple, which was built in pagoda style, has a gilded roof and beautifully carved silver doors. Swayambhunath, Located approx. 3km from the center of Kathmandu, this Buddhist stupa is said to be 2000 years old. The stupa which forms the main structure is composed of a solid hemisphere of brick and earth which supports a lofty conical spire capped by a pinnacle of gilt copper, Patan, also known as Lalitpur, is a city of fine arts, enclosed within 4 stupas, which are said to have been built in the 3rd century A.D. by Emperor Ashoka. & Durbar square which houses a bronze collection, the Krishna temple built by King Siddi Narsinh Malla, Hiranya Varna Mahavihar, and Mahaboudha Temple. After sightseeing, return to the hotel. Overnight stay at the hotel.

We leave Kathmandu in the morning for Syabrubesi, a village which is also the starting point for treks into the Langtang valley. Our journey will be on a winding road through frequent switchbacks. On a clear day we get to enjoy outstanding views of Manaslu, Annapurna and Ganesh Himal. Our trek for today ends with a descent into the small village of Syabrubesi. Overnight in Syabrubesi.

After breakfast, we will begin our trek to Syabrubesi along the Langtang Khola. We ascend and descend simultaneously through oak and rhododendron forests. After crossing a bridge over the Langtang Khola (small river), we ascend on a steep trail which will lead us to the Lama Hotel. Overnight in Lama Hotel.

A day further on the forest peters out and you start getting the first tantalizing glimpses of snow-capped peaks. From the Lama Hotel the trail climbs steadily to Ghora Tabela with glimpses of Langtang Lirung (7246m) through the trees. At times the trail becomes very steep but only for short distances. Gradually the air becomes thinner and the climate colder. At Ghora Tabela (3010m) the trail leaves the forest and a spectacular view of Langtang Lirung appears. Ghora Tabela was once a Tibetan resettlement camp but is now an army post. There is a good lodge where we’ll stop for lunch. Continuing up the valley, leaving the forests behind, the trail ascends steadily up to Langtang village, passing below a monastery about 30min beforehand. Langtang is an interesting Tibetan-style village with stone- walls enclosing houses and fields where you just might see your first yaks. The Langtang National Park headquarters is also located here. After Langtang, you can see a community of typical flat-roofed Tibetan houses and the valley flattens and broadens into open pasture. This is perfect for raising yaks and you’ll see these imposing beasts everywhere.

After breakfast, we will start our journey to Kyangjin Gompa, a principal monastery of the region. We pass by water mills, prayer wheels, chortens, with sacred mounds of rocks with inscriptions carved on them.  We also pass by the largest main wall in Nepal, made from stone with prayers written on them. After the short trek, we will spend the rest of the afternoon exploring the Buddhist shrine in Kyanjin Gompa and surrounding areas with the amazing views of the mountains.

We spend the whole day exploring Tserko Ri which will also help us acclimatize to the high altitude. We begin early in the morning. The trail passes through yak pastures before ascending to Tserko Ri. The sunrise view from the top of Tserko Ri is extraordinary. We get back to Kyangjin Gompa by late afternoon and explore the beautiful monastery while enjoying views of the Himalayas, glaciers, birds and yaks.

We begin our trek after breakfast and retrace our steps to Lama Hotel. Most of the trekking today will be downhill as we pass through forests and beautiful Tamang villages. We also get to enjoy different views of the Himalayas that we had missed climbing up. Overnight in Lama Hotel.

Today will be a short walk but it is important to not reach Gosaikunda today because the steady gain in altitude will help us acclimatize better to the high altitude. After trekking for a while we will pass by a chorten and a checkpoint. From the checkpoint, we move south and pass by Garta Village and Phulung Monastery before reaching Shin Gompa to spend the night.

Today we get to enjoy fantastic panoramic views of the Himalayas including the Annapurnas, Hiunchuli, Manaslu, Ganesh and Langtang. We follow a ridge for the most part of the day and catch a glimpse of the first of the holy lakes. The third lake, Gosaikunda (4380m), is of particular religious and cultural significance for the Nepalese and is one of Nepal’s most sought after pilgrimage sites. The lake is surrounded by mountains on almost all sides and has a great ensemble of nine other lakes to accompany it. Every year during Janai Purnima in August, hundreds of Hindu pilgrims visit the lake for a holy bath. The large rock at the center of the lake is said to be the remains of a Shiva shrine. Overnight in Gosaikunda.

We move around the lake’s shore before ascending towards the Laurebina Pass (4610m). The Helambu region begins at the Lauribina La (pass) and descends to the Melamchi valley. The trail is rough and crosses moraines, but is well marked with cairns. We pass through three more small lakes before reaching the pass. We climb a small hill and enjoy excellent views of the area. Our trail passes through Surya kunda before reaching Ghopte. Overnight in Ghopte.

From Ghopte, the trail descends to more caves and enters a thick forest of Pine and rhododendrons. After crossing a stream, which is dry for part of the year, the trail will make a final ascent to Tharepati (3490m), a grouping of small stone huts used in the summer months by herders. After lunch, we’ll take a moment to climb the hill to the east of the ridge for views of Dorje Lakpa, Shishapangma (8013m) and peaks all the way to Khumbu.

The day starts out with an easy 1-hr descent through forests, across flower-strewn meadows and crossing streams before arriving at Magengoth at 3150m. This is a very remote area of high pastures and oak and rhododendron forests. Keep your eyes open for wildlife. If you’re going to see any wildlife at all other than birds, this is probably the most likely area. For the first 3 hrs the trail descends gradually, but the second half of the day ‘s trek is a steep descent to Kutumsang (2470m), a small village on a windy ridge saddle. The Langtang National Park office here will probably check your park permit. The village has completely adapted itself to trekkers; almost every house in town is a hotel.

Keeping to the side of the saddle, the trail ascends to a grassy meadow where you can look over to a large chorten at Gul Bhanjyang. Cross a pass at 2620m followed by dropping down to the Tamang village at 2130m. This is a delightful, classic hill village with a pleasant main street. Continuing along a forested ridge to Thodang Betini, a long strung-out village at 2100m. Beyond Thodang, you’ll come across a 2470m pass at the top of the Jhogin Danda ridge, where a steep, 200m descent on a stone staircase will bring you to a few tea shops at Chipling (2170m). More steep descents follow as the trail drops to the Pati Bhanjyang at 1770m. The trail then makes a steep climb towards 2100m to Chisopani. The view of the Himalaya from Chisopani is spectacular enough to justify a night here.

Day 16: Trek from Chisopani to Sundarijal & Drive back to Kathmandu

The sunrise on the Himalaya, from Annapurna to Everest, is particularly outstanding from this point. After passing through the village of Borlang Bhanjyang, you continue ascending most of the Shivapuri ridge through dense forest of pine, oak and rhododendron trees. Skirting down from 2440m, you can see the remnants of a Chaurabas village. Followed by entering into the Shivapuri Watershed & Wildlife Reserve, a 112-sq-km walled area. At Mulkharka (1895m), we’ll take a break where you can sit back and enjoy a spectacular panoramic view of the Kathmandu Valley. The end of the trek comes to a halt at Sundarijal and we’ll drive back (1hr) to the dust of Kathmandu.

Transfer to Airport for flight to home.

For Price of this trip, please Contact us : info@nectravels.com 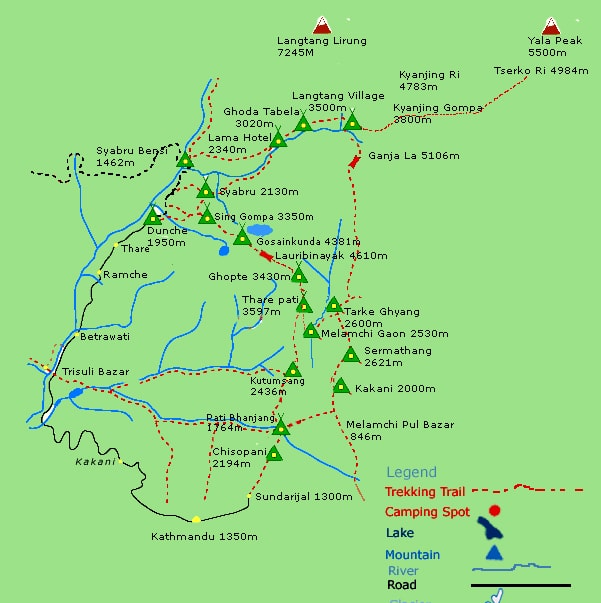 The Langtang trek goes through the Langtang national Park, which was designated the first Himalayan National…

Tamang Heritage Trail in a previously restricted area near the Tibetan border. Its unexplored regions of…