Mount Dhaulagiri (8137m) is the seventh highest peak in the world rises above the Kali Gandaki River which flows between the Annapurna massif. The trail extends through one of Nepal’s wildest and most remote areas where the mountain scenery is simply breathtaking.

This journey is recommended for experienced high altitude trekkers in very good physical condition. The route is possible only in the autumn season due to excessive snow and ice conditions in the winter and spring. The region is practically virgin territory for trekkers providing some extremely dramatic contrasts. Well-equipped and fully self-sufficient parties can do the circuit of the Dhaulagiri massif.  The route crosses two high passes which lie in remote country far removed from any outside assistance.

This trek is start from Beni, the Headquarters of Myagdi district. This trail follows the Myagdi Khola, the river that drains the southern side of the Dhaulagiri massif. Passing through the settlements of Darbang and Muri, the country is still quite heavily populated with scattered villages and farming land. Beyond Muri, the Myagdi Khola swings north and the landscape becomes much more rugged and sparsely populated. The tree line is reached just below the Italian base camp, located at the snout of the Chhonbaraan Glacier. This is an ideal place to spend a day acclimatizing and walk about exploring the hills in the area.

The next two days are spent on the glacier; the second night is spent at Dhaulagiri Base Camp, a rugged spot with some spectacular views of the western face of Dhaulagiri. From here the trail crosses the French pass which at 5,360 meters is the highest point of the trek. Descending from the French Pass you enter the lonely, but fascinating area known as Hidden Valley. This place is one of the few true wilderness areas accessible to trekkers in Nepal. The valley stretches away to the north eventually narrowing to a rugged gorge that connects the Upper Dolpa. There are reports of many endangered species residing in this area including the elusive snow leopard.

From the Hidden valley, the trail now crosses Dhampus pass (sometimes known as Thapa pass). While not as high as the French Pass, it is roughly 100 m lower, Dhampus Pass has a reputation for bad weather which can make the crossing and subsequent descent something of a problem. Trekkers must be aware of the health of their group members and staff, especially on the section between the French Pass and Dhampus Pass. Any person suffering from symptoms of AMS must not be taken on over the French Pass but must immediately be taken back down the Myagdi Khola to a lower altitude. Having a group member suffer from AMS between the passes poses a serious problem as the only way to get the patient some assistance is to ascend first before descending, which would make the problem worse.
Having crossed Dhampus pass, the trail descends into the valley of the Kali Gandaki meeting the main trail at either Marpha or Tukuche. On the way down to the valley, there are some spectacular views across to the Annapurnas and up into the arid steppes of Mustang.

Day 01: Arrival to Kathmandu. Pick up from airport and transfer to hotel / tour briefing in the evening / introductory evening meal

Arrival to Kathmandu. Pick up from airport and transfer to hotel . Trek briefing in the evening

Day 03: Fly from Kathmandu to Pokhara / drive to Baglung.

Fly from Kathmandu to Pokhara / drive to Baglung.

Day 04: Trekking from Baglung to Maldhunga

Trekking from Baglung to Maldhunga.

Getting off the glacier above the base camp often requires the use of ropes. Once over the steep moraine walls we reach gentler, less strenuous country. After a breathless climb to the top of French Col (5360m,) the views of Hidden Valley open out. The broad valley is reminiscent of Tibet and Ladakh and so are the temperatures (at least -20ºC at night).

A rest day for side treks and exploring around the surrounding peaks.

Day 16: Hidden Valley to Yak Kharka After climbing over the 5250 m.

Dhampus Pass, we traverse avalanche-prone slopes and then take on the steep descent to Yak Kharka.

Trek Ghandrung to Birethanti than  drive to Pokhara  & transfer hotel.

Day 24: Drive or fly from Pokhara to Kathmandu & transfer hotel.

For the price please write us: info@nectravels.com 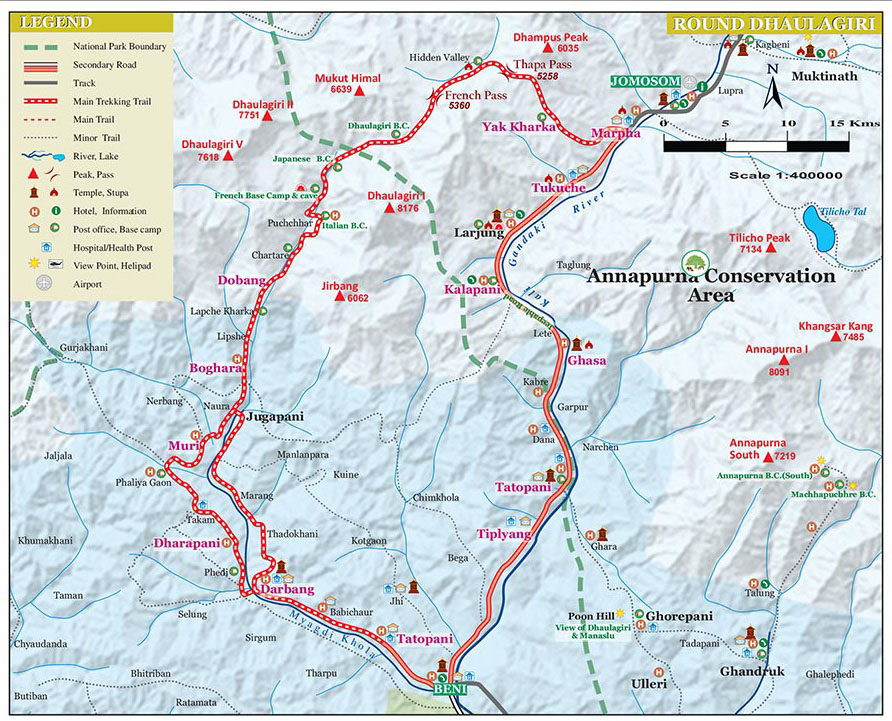